Learn about the history of our work

Coming to America
In August 1868 Jeanne Jugan saw the first group of Little Sisters leave for America – not one of them spoke English. They arrived in New York in September, establishing their first home in the United States in Brooklyn. One of the Sisters wrote: “The public appear delighted to see that we are willing to work for the poor; that we ask no endowment; that we desire to trust in Providence and in the generosity of the public.”In October 1868 a group of Sisters arrived in Cincinnati to establish the second home in the states. Arrangements for the home were organized at the request of Archbishop Purcell and philanthropist Sarah Worthington Peter. Mrs. Peter, a convert to Catholicism and daughter of former Ohio governor Thomas Worthington, journeyed to the Motherhouse in France and then to Rome to secure approval for the Little Sisters' foundation in Cincinnati. To this day, whenever a new Sister arrives in Cincinnati, the Sisters visit Sarah Peter’s gravesite in gratitude for her hard work.

The Sisters’ first residence was a storefront property on Lock Street in downtown Cincinnati; after only two months Sisters were extending hospitality to 80 Residents. The first official home in Cincinnati, St. Joseph Home located on Florence Avenue, was founded in 1872. As the Sisters’ mission grew a second home was needed; St. Peter’s Home was established on Riddle Road in 1886 and an addition to expand the home was completed in 1899.

During the first half of the 20th century many local Residents were adversely affected by the world wars and the Ohio River Flood of 1937. The loss of loved ones overseas and the loss of lives and property from the flood left many citizens with nothing. During this period the homes in Cincinnati welcomed many new Residents growing to serve 435 elderly men and women by 1939.

Recent Developments
By the late 1960’s the Florence Avenue home battled leaky pipes, poor ventilation, water backups and inadequate electricity. As an answer to the aging building, and a desire to eliminate its dormitory style living, a new Home was planned for Riddle Road – one large enough to accommodate the Residents of both locations. The new home opened in 1975 and was named in honor of Archbishop Paul Francis Leibold, known for being a warm-hearted, humble, faithful and hard-working servant of God.

Today
St. Paul’s Home serves as the residence for nearly 100 men and women ranging in age from 65 to more than 100 years old. To meet the varying needs of new residents as well as the changing needs of those progressing through the aging process, the home includes independent living apartments as well as residential care and nursing care rooms.

In 2018 Little Sisters of the Poor will celebrate 150 years in Cincinnati. Since their arrival in the Queen City, there have been additional homes established in the United States – including Louisville, Indianapolis, Toledo, Cleveland and Pittsburgh – as well as throughout 31 countries on 5 continents.

For more information about history of the Little Sisters of the Poor in the United States and around the world, click here. 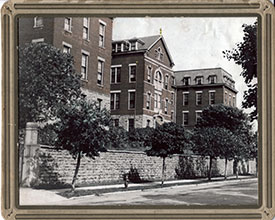 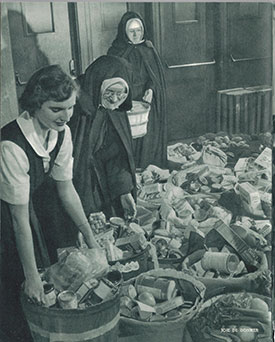